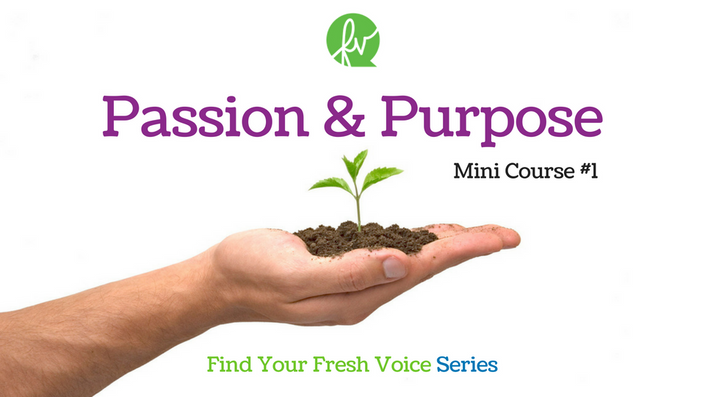 Discover your ideal publishing path, best book idea and what success will mean to you

The coupon code you entered is expired or invalid, but the course is still available!

Do you have one idea for a book but don't know how to focus it, or do you have tons of ideas and don't know which one to pick? Do you desperately want to get your words down on paper but don't know where to start? Do you need guidance finding the best resources for your project?

* Do I self-publish, work with a publishing service, or look for a traditional publishing opportunity?
* What is my purpose in publishing a book and what ends will it serve?
* Of the six ideas I have for a book, how do I choose which one to do first? Or, if I only have one, how do i test it to make sure it can be successful?

FreshVoice courses are not theoretical, or general information. They are actionable, hands-on activities that will help you write the best book possible.

It's meant to be an exciting and worthwhile journey, with concrete deliverables that will keep you motivated, creatively challenged and on track to achieve your goals. Suzanne is an experienced coach, facilitator, author, blogger and publisher. She holds a Masters Degree in Adult Education (with a specialty in online learning) from the University of Calgary, and a bachelor in Journalism & Mass Communications from Kansas State University. She has written two non-fiction books to date, Through the Rear View Mirror: The ASL Paving Story; and Birth of a Boom: Lives & Legacies of Saskatchewan Entrepreneurs. She is currently working on her third non-fiction book and her first novel.

Suzanne founded Indie Ink Publishing in 2010 as a creative content services company and boutique non-fiction publisher. Though small, having produced fewer than 20 titles, Indie proved its passion for producing high quality books from authors with fresh voices. In the process, Indie won several international book awards for its titles, and produced a Canadian best-seller. In 2016, FreshVoice purchased the assets of Indie Ink, as Suzanne moved from Canada to the Seattle area, where she now provides author coaching, online training and publishing services for her clients.

Along the way, Suzanne became one of the first publishers in Canada to experiment with crowdfunding for books and authors, and now serves the National Crowdfunding Association of Canada (NCFA) as an Ambassador. She blogs about crowdfunding, and delivers webinars and workshops in addition to her Crowdfunding for Authors & Publishers courses here in the FreshVoice Academy.

A Renaissance girl, Suzanne's 35-year career has included writing of nearly every kind, including two original albums of swing/jazz/pop music. She has won numerous writing and production awards from national and international organizations like CASE, PubWest, The Kansas Bar Association, The Great American Song Contest, the Song of the Year competition, and others.

She is founder of The Pink Notebook Project, a blog and research project that will culminate in a book and supporting online training in the next several years. She blogs for FreshVoice and has written for Huffington Post, BookBaby and other blogs about numerous subjects central to a writer's journey and book publishing.

During her professional career, Suzanne worked in advertising and public relations in New York City, was PR Director for two research-intensive Canadian universities over a period of 15 years, and ran her own communications consulting firm, Paschall Arts, for 10 years.

After completing Passion & Purpose with a fully understanding of your book's purpose, you will be ready to move on to Your Author & Book Brand, where you'll define your values, beliefs and characteristics, and then turn these into a brand for yourself and your book that truly aligns with who you are.

Don't forget during your journey to stop now and then and have a WOW moment... I know from experience that writing a book is as much about discovering yourself as it is putting words on paper. Enjoy the trip!

When does the course start and finish?
The course starts now and never ends! It is a completely self-paced online course - you decide when you start and when you finish
How long do I have access to the course?
How does lifetime access sound? After enrolling, you have unlimited access to this course for as long as you like - across any and all devices you own.
What if I am unhappy with the course?
I would never want you to be unhappy! If you are unsatisfied with your purchase, contact me in the first 30 days and I will give you a full refund.
off original price!

The coupon code you entered is expired or invalid, but the course is still available!